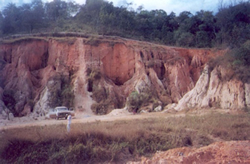 (BEFORE) Erosion in loan areas for the construction of a hydroelectric dam. 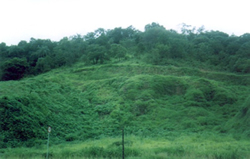 Urban erosion, which in the past had two verges and three slopes and the service had already been performed twice over a five-year period, the first time the plant protection was done with hydroseeding and the second with plated battal grass, in both areas. In some cases, there was failure, although both retaludation and drainage occurred.

The third time the client opted for bioengineering techniques to be less expensive (three times smaller than traditional engineering), and does not require retrofitting and construction of another drainage system. This technique avoids large earth moving, and most importantly, if the recalculation were performed, the larger surface of this soil would be exposed to weather conditions, which would result in the formation of new erosive foci.